Big thanks to onX Backcountry for sponsoring this post. Plan your next adventure with 20% off your app subscription. Use the code WILDSNOW20 at checkout. Skiing down the ‘haul road’ on the north side of Atigun Pass.

It’s raining right now. The last of this season’s snow is quickly washing away from the mountains outside my cabin window. A wet packraft sits in my truck, flip flops are by the door, and I don’t even know where my headlamps are. Summer, it seems, is an inescapable fact of life. This however, does not mean that skis have no place on the docket (I don’t really believe in storage wax). Alaska saw a solid snowpack followed by a late spring this year, opening up ample opportunities for one of my favorite activities – chasing snow.

Like a game of hide-and-seek, ski turns tuck into nooks and crannies, run upstairs into the mountains, and hide in well-guarded icefields, but if you know where to look, they are there. Last month, as isothermal barely frozen water showed up in Southcentral Alaska, I checked the cupboards and closets for hidden pow, looked in the crawl space for unharvested corn, and even crawled under the deck for any signs of crust. The game was afoot, and a worthy opponent knows how to make you work for it. This year, the snow led me north. Way north. Fifteen hours in the truck from Anchorage, greening trees, bursting buds, and singing birds whispered, “the snow went that way…” Finally, there it was in the Arctic.

I have always found that a positive attitude and a high latitude go hand-in-hand. If you have not experienced this phenomenon, go to the Brooks Range. This ancient geologic remnant of the ancestral Rocky Mountains is not a land before time, but a land beyond it. Towering limestone, craggy ridge tops, sweeping tundra slopes, and the midnight sun make it a place like no other. Were a mammoth, or a dinosaur, or a centaur to walk by in the Brooks, I would not look up in astonishment. Instead, the astonishment with which I was already gazing at the landscape would continue unabated, and I would think, “well yea, that figures.”

My wife and I spent six days camped by the road at the edge of the world. We saw three bears, followed wolf tracks, watched an eagle hunting arctic ground squirrels, heard a muskox grunting at 4 am, and skied the last of the pow and first of the corn. We weren’t the only ones enjoying the snow.

The Brooks Range runs from western Alaska into the Yukon for 700 miles. There is one road that crosses the range. The Dalton Highway, made famous by season three of Ice Road Truckers, is maintained for year round access to the Prudhoe Bay oil fields. At 4,739 ft, Antigun Pass sits 130 miles north of the Arctic Circle, atop the road corridor. Couloirs drop to the road, the nearest tree is miles to the south, and ski terrain is everywhere. Why did the skier cross the road? To look for spring snow!

Fickle weather, fickler snow conditions, and the easiest access being a nine hour drive from Fairbanks keeps this location off most skiers’ radar. I’d been up to the Brooks a few times in the summer, but this was my first spring trip with skis in hand.

Our first night camped by the road was quiet. A few trucks rolled by on their way north as a light snow fell. We headed up a north facing shoulder in the morning. To our amazement, facets still sat below a stiff crust.

We quickly retreated down the ridge on the recommendation of arcing shooting cracks. Across the road, we donned ski crampons and headed up a west facing gully for perfect spring corn, transitioning at the top of the slope on top of the first bear tracks of the year. 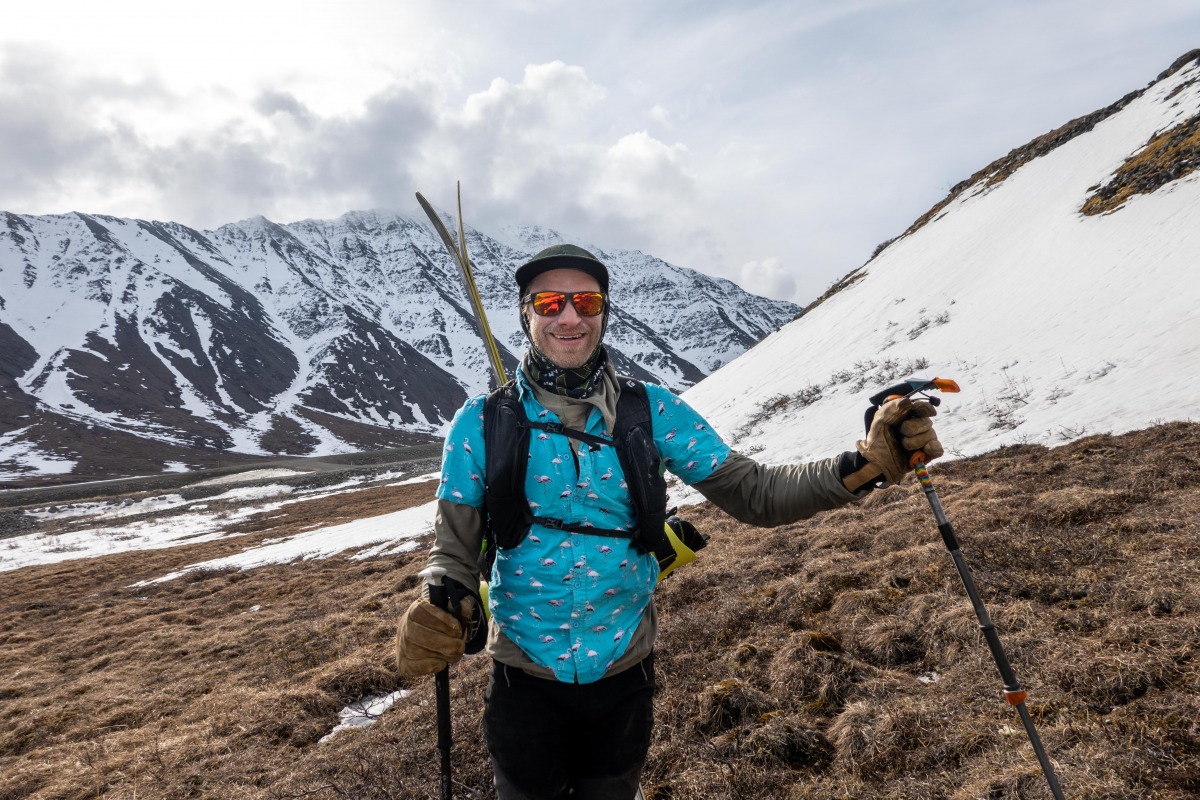 Stoke was high, even if we had to walk to the snow sometimes… The top of this run was pow, the bottom was corn…it look short on the approach, but ended up being 2000 ft from snow line to the ridge…

Just a few miles away, the Arctic National Wildlife Refuge stretched out across 19.2 million acres to the Arctic Ocean. The Refuge has been at the center of a conservation battle for decades. As nearby Prudhoe Bay oil wells have begun to dry up, many Alaskan politicians and industry developers have looked to the Refuge for the next big windfall. The story of this place runs far beyond oil — I for one think the greatest resource in this corner of Alaska is not underground, but in the land, wildlife, and wildness. Places like ANWR often get discussed as though they are mythical locales arrived at by riding a unicorn along some yellow brick road from Camelot, but you can just hop in a car and drive there (or at least pretty darn close).

The next few days we found summer on Souths, winter on Northwests, spring on Wests and Easts, bears on all aspects, and plenty of sunshine. Runs were between a couple hundred and a couple thousand feet long. We skied and explored. Chasing aspects west of the road. Clouds set back in, but this time it rained. The game of hide-and-seek was on again. We headed back south to start the search over. Fortunately, we have plenty of places to look.

Gas and burgers are available some 60 miles south of Atigun in Coldfoot. We found great terrain from the Chandalar Shelf to the Atigun River. There is no guidebook. There is no avalanche forecast. There is no local ski ‘scene,’ few peaks don names, and trip reports are nearly non-existent. Just head north and then keep going north.

Wager With The Wind — Book Review

Very inspiring search for snow! If we could leave the bear at a distance, the view from the road looks like a dreamscape.

Great report! Was up there in the summer 20 years ago. Now has me thinking of going back with skis. Love it!

Seems like winter might’ve lasted a little longer than usual up there! When exactly was this trip? In mid-June the webcam around Chandalar Shelf looked pretty snowy!

Thanks, Alex! I lived in AK for three years back in the early 90s, but never made it up to the Brooks Range. Planning to return for a long stay in a couple years (with my skis). What’s the typical start of the corn season in the Brooks? Do the north slopes ever melt out completely?

I snuck in some turns up in the Brooks when I did my graduate school research up there. A wild place, truly like no other. This was a great read. Man I need to move back to AK…