Big thanks to onX Backcountry for sponsoring this post. Plan your next adventure with 20% off your app subscription. Use the code WILDSNOW20 at checkout.

Check out Part I of the Adventure From Home Elks edition focused on local ski history, snowpack and route planning.

I rushed to the Roaring Fork Valley because conditions aligned for a descent of Pyramid Peak the next day. Mike was free the day after so all was set for a micro-vacation to Aspen for some hopefully-quality skiing.

Our morning started at 2:00 AM, biking up Maroon Creek Road. We zipped up the paved path in dry, fast conditions until we stashed bikes at the confluence of West and East Maroon Creek (our planned egress connector point). A brief ski boot road walk led to skinning above Maroon Lake. We aimed to enter the Banana Bowl on Pyramid’s north flank.

Light crept into the sky as we reached the top of Banana Bowl. We crested the bowl to see a long and technical ridge in between us and the summit. The ridge was slow and methodical snow climbing. We felt fortunate for the heavy sky cover that kept the fresh snow on the east face cool and dry. As we traversed above the east face and neared the summit, Aidan and I tested the bonding at the old/new snow interface. There was promisingly quality adhesion. However, we approached each new section of the upper face with skepticism and dug into the slope to gain a better understanding of the general snow structure. This photo is from above our exit of Banana Bowl. The summit snow ridge looked long and engaging. The sky was still in ‘purple hour’ just after dawn. 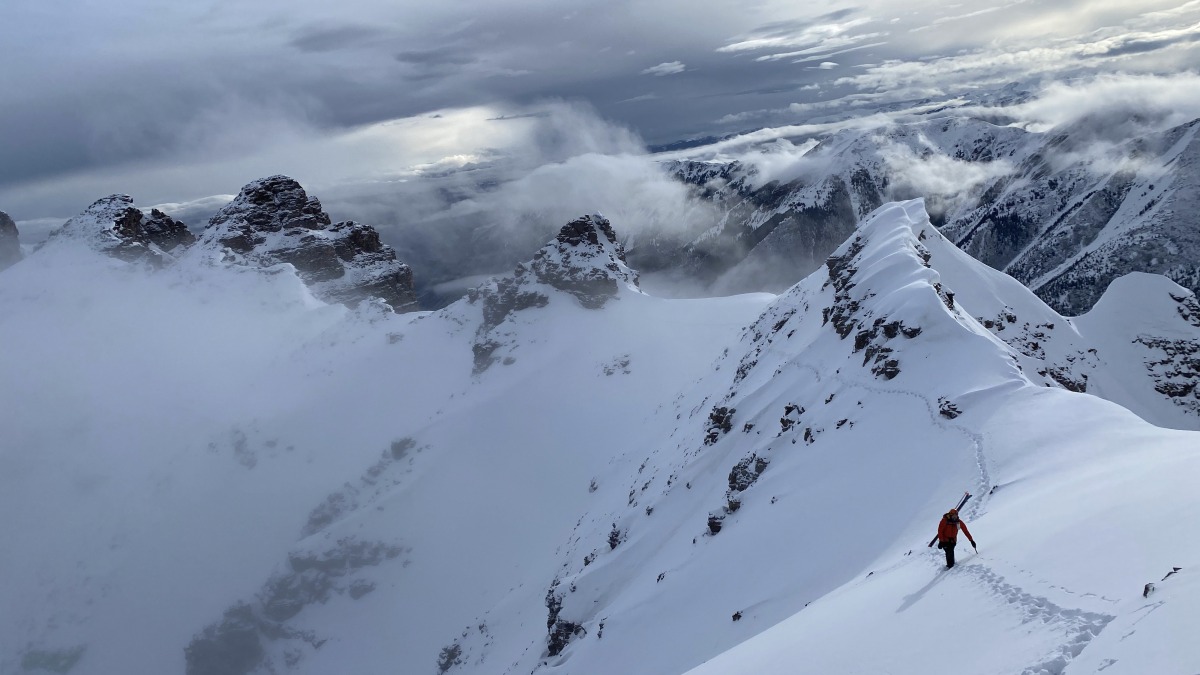 Here’s Aidan climbing the summit snow ridge. We were above a sea of clouds tangled up in valleys below. It was quite nice.

The second half of our ascent. Left: Aidan reached the summit as the tide was rising with the sea of clouds.
Middle: A closer view of the east face. (3)
Right: Aidan bootpacking up the east face.

Nearing the top, the face steepened, making us ever more excited for the technical skiing to come. A cloud layer was swirling below us as we climbed the summit snow ridge. It was an absolute treat to summit Pyramid Peak, above a sea of clouds, and after a safe and engaging ascent. We approached our descent with caution, considering the freshly fallen snow and looming rocks that littered the upper face.

Skis were stomped into, boots were cinched down, and psych reached an all time high as we began the devious descent. Our pitches were short and we hooted back and forth to each other from safe zone to safe zone. We built a rhythm leapfrogging one another, each connecting jump turns down the steep maze of the east face. The snow was soft with a styrofoam base. It provided for secure edging and stupid-big open-mouthed smiles.

Our Pyramid descent. Left: Aidan skied down the mid-face, almost breaking through the low-visibility cloud layer.
Middle: Aidan questing into the sea of clouds.
Right: I stopped to take a photo on the summit pitch. It was comically steep.

We dove into the dense cloud layer below us and lost visibility of the surrounding peaks. The thick clouds created a magic, separate-reality ambiance. Aidan and I were in a place of intense presence from the engaging skiing, quality conditions, and exquisite position. We skied through a choke at the bottom of the face that opened to an expansive apron. We hugged, shook our heads in disbelief, and continued down another 1000 feet of powder skiing until the snow ran out and we transitioned to willow-thrashing. The descent felt like a dream with the lack of visibility and powder conditions. The crux choke was just above a ‘sluff-pow’ filled apron. The choke was icy, but luckily required no rappels. On the apron, we popped below the cloud layer. It felt like transporting back to reality after an otherworldly descent…

Fatigue hit me like a wave once walking down East Maroon Creek. The euphoria faded and was replaced with elated exhaustion from the tense mental space that I held during the past eight hours of travel. We unfortunately couldn’t see our tracks, as the thick sea of clouds was still tangled in the peaks above us. The egress included isothermal snow, many transitions from skis-on gliding to skis-off hiking. We soon crossed the creek, reunited with our bikes, and coasted down Maroon Creek Road back to the cars. Truthfully, I underestimated the level of commitment for this line, and it is an outing that will stick with me for the rest of my life. What a rich experience with a great friend.

Aidan and I returned to town shortly after 2:00 PM, giving me the full afternoon and evening to savor our day in the mountains [and get some much needed recovery]. From the snow and weather conditions, Mike and I decided to ski a couloir off the shoulder of Hayden Peak. This would be a shorter day, provide fun technical terrain, and hopefully result in some powder skiing. The weather was forecasted to be clear skies with warming temps and low winds. That forecast screams ‘start early and end early’ to me. Mike and I finalized plans over the phone to meet at the trailhead at 6:00 AM the next day.

We started hiking up the summer trail in sneakers. We transitioned to skis soon enough, gained an intermediate ridge, and quickly popped above treeline. Our intended line was in sight…or at least the face was. The couloir itself was inset behind a ridge of rock. This didn’t let us inspect the line before committing to our descent. We acknowledge the assumed risk of this choice before continuing the ascent. In the upper basin below Hayden Peak, we reveled in the classic Colorado conditions: bluebird skies, no wind, cool temps, and not a single other person in sight. A short bootpack led us to the top of the line. Touring up the east basin of Hayden Peak provided no cloud watching, no skin tracks to follow, and not a single sign of other skiers. It was awful.

The descent was a funneling couloir with a midline rappel. We were happy to know that there was a recently refurbished rappel anchor on the route. Below the rappel was a narrow hallway with a frozen ice flow on one side of the couloir. Such a cool position! The rappel anchor was two shiny bolts with fresh, equalized cord. The rappel was a full 30 meters in length. The couloir just after the rappel looked extremely inviting.

Mike and I moved efficiently while chatting back and forth about gear, trip plans and jump turning technique. The snow warmed up the further down the couloir we skied. The low elevation exit ramp turning to full force mashed potato turns. We were maybe 45 minutes too late. That’s okay, because the conversation and casual pace made the day into the utmost pleasant of outings. Out the couloir, a quick bump back over the treed ridgeline, and a classic BTL luge track descent led us back to within 100 meters of the car. We were both surprised with the mild feel of the day considering the epic position and technical skiing. High fives and sparkling waters were exchanged. What a privilege to share that fun-in-the-sun outing with Mike. It was a huge contrast to the demanding day of skiing just the day before with Aidan. Both were quality skis, but with very different feels.

Our descent down Gorp. Left: We were able to ski within 100 meters of the car where sprinkling waters and open-toed shoes awaited our return.
Middle: Mike made sassy hop turns down the narrow crux of the route.
Right: Mike and I snapped a shameless selfie on the shoulder of Hayden.

The general afterthought from my trip to the Elks was that I skied with a small margin of safety. I didn’t build a big enough buffer for managing uncertainty within either tour plan. Aidan and I skied a high elevation slope without sampling similar, lower consequence terrain. Mike and I skied into a couloir without inspecting the line from below.

Things I did well:
Gain an understanding of the regional snowpack
Learn about the specific terrain from local knowledge
Read the avalanche and weather forecast

Things to improve on for next time:
Sample lower consequence terrain of a similar aspect and elevation before committing to a more dangerous slope
Visually inspect terrain before skiing it top-down (more ideas on top-down skiing here)

Things worked out, but moving forward I hope to add a larger margin of safety with the following points of improvement. Every ski outing is an opportunity to gain expertise and improve safety/technique/fun-having. I’m fortunate to have shared those rich experiences with quality company in new terrain. I won’t forget either outing for a long time.

Slator Aplin lives in the San Juans. He enjoys time spent in the mountains, pastries paired with coffee, and adventures-gone-wrong. You can find him at @slatoraplin on Instagram or outside Telluride’s local bakery — Baked in Telluride.

So great, love the history, the prep and the climb/ski itself. Huge respect to you guys and all who’ve pulled off this line!

Impressive, man my bedtime starts at 2am.

Congrats on a couple of fine descents. The clouds on your Pyramid day definitely hide the exposure. If anyone wants to get a feel for it, I’ve been told that the edit from my solo 2019 mission captures it well (on my wife’s page): https://www.youtube.com/watch?v=Qh-mZs5_TXk

Thanks for the great report and photography. This level of ski mountaineering is strictly an armchair proposition for me. The rappel anchor looks like a textbook solid anchor! Its a pleasure to see photographs of scenery and specific techniques, along with your careful planning thinking.

Who put in the bolts!? Reveal yourself!