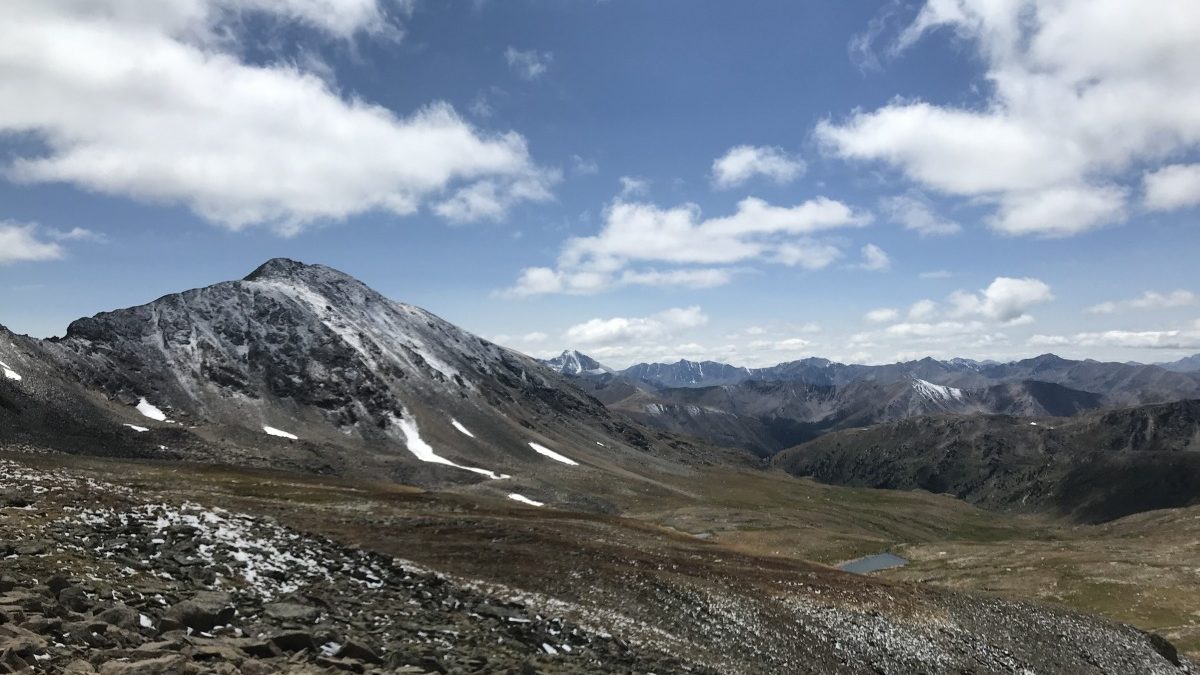 The first snow of the season dusted the peaks off Independence Pass this week, hopefully an indication of a powdery winter to come.

The first dusting of early season snow fell on the high summits of the Colorado Rockies last week. It was a welcome respite from August temps that barely dropped below the 90s and perpetually smoky skies thanks to four major wildfires burning across the state. Hopefully cooler, clearer, snowier days are ahead.

While the weather may be trending toward something that resembles seasonal stability, the rest of the world isn’t quite there yet. It seems we’re all hovering in a collective state of ‘wait and see’ in terms of what the ski season will bring. So here’s the latest on what we do know. Subject to change, of course.

Last week, Vail announced its 20-21 operating procedures for its 34 North American resorts. A few things were unsurprising: Masks worn at all times, no more chairlift rides with strangers, less on-mountain dining, no more bellying up to the apres bar. But one big change is causing a stir: a reservation system.

As detailed in the letter written by Chief Operating Officer Rob Katz published on August 27 on Vail Resorts website, passholders will have early season access to Vail Resort slopes and get priority reservation throughout the season. Ticket counters will no longer operate and any ticket reservations can only be made online or via a call line. Day-of reservations will be possible only if there is space on the mountain, meaning those spontaneous powder days might be hard to plan for.

So, what’s a powderhound to do on a powder day? Probably go backcountry skiing instead. In response to the letter, Colorado’s Summit Daily published this article detailing how the reservation system is prompting concern among backcountry groups and forest service managers. If the crowds that rushed to the backcountry when the lifts stopped last spring are any indication, people will head off-piste when they can’t go on. That could lead to a lot of problems.

Here’s a question that’s been nagging me throughout this whole thing: most of the conversations I’ve had or overheard around the likelihood of more populated backcountry ski season are negative. There are good reasons — crowds track powder stashes fast, you aren’t really in the wilderness if you’re surrounded by other people, more uneducated newbs potentially equals more avalanche incidents, parking always seems to be an issue somewhere, etc. etc.

But my question is: Could a boom for ski touring actually be a good thing instead of all doom and gloom? Readers, your thoughts?

In an effort to meet the growing need for backcountry safety, this winter the Utah Avalanche Center is bringing safety precautions to trailheads. Chad Brackelsberg, UAC Executive Director told me about it when I interviewed for a piece about avalanche forecasting budgets last week. Once there’s adequate snow for skiing, UAC members plan on posting up at popular early season trailheads to connect with backcountry users. “We are going to talk to them about avalanche safety, gear, offer beacon drills and rescue practice if they want it. We want to be there to show that we are looking out for the community.”

3-6 month winter snow forecast, or not

Speaking of winter, how is this one shaping up? A recent article on the ski resort forecasting website Open Snow, offered at least a headline promising the 20-21 long range winter forecast. There were plenty of colorful NOAA graphs illustrating where there could be warmer temps and more or less snow but in the end the conclusion was less than satisfying: It’s impossible to forecast accurately 3-6 months out. Noted.

Meanwhile, the Farmer’s Almanac is doing what it tries to do best every year: forecasting a season 3-6 months out. In keeping with the publication’s long-standing tradition of predicting weather patterns, the latest Almanac calls for dry weather in the northwest, cold and above average snow in the middle and northern rockies, and cold and snowy weather across New England. It’s worth noting that the sparse forecast for the Midwest is “Cold, very flakey”. Does that sound weird to anyone else? Let us know how that goes, skiers of the Midwest.

So, does that mean your region will have snow? Won’t have snow? As usual, it’s more than likely we won’t know until we get there. In the meantime you could look for any of these harbingers of a good winter I wrote about last year.

In other snow related news, environmental engineers at the University of California Irvine recently developed a tool to determine long range snow droughts around the world. Research conducted with the tool found that much of the Western U.S. has experienced prolonged snow droughts, especially over the last 20 years. Studies found that Russia and Europe have experienced snow drought as well, but to a lesser extent.

According to this article published on UC Irvine’s website, the tool is the first of its kind. It will better enable researchers to monitor snow water equivalent deficiencies in specific regions of the world, useful both in the context of climate change and that snowfall can have direct impact on ecosystems, agriculture, socioeconomics and more.

How not to react to a grizzly bear

Since we’re still in the late days of summer, here’s a seasonal note to end on. A group of hikers in Glacier National Park demonstrated exactly what not to do when you spot a grizzly bear: Run like your life depends on it. Watch the video, and keep that bear spray handy.

It is shaping up in the Pacific Ocean to be a La Nina winter, at this stage of the forecast.

Throughout the years I have seen weather forecasters (or atmospheric scientists) make annual climate predictions based on factors such as ENSO, tele-connections, etc. These are great, I suppose, if I managed a farm or water district. What I’m really interested in is someone who can predict powder days. I want to know exactly which days of the season will have 6+ inches of skiable powder! While I’m on my wish list, I also want a detailed map, updated hourly, showing the exact location of avalanche triggers…

@ Joe. Seems reasonable enough. With all the concerns about the impending crowded backcountry, I’m wondering if CalTopo can develop a heat map so you can check slope angles AND know that no one else is farming your stash.

I can give you forecasts months in advance. A new technology has made this possible (Google Cycling Weather Hypothesis). The weather cycles and repeats. Each year is different—in the fall the length of the repeating systems is established 19/20 was 59 days. Last year had 6 main systems that repeated at the same time each cycle. The best storm occurred October 10th I coined the Toilet Bowl, due to its look on the 500mb chart. That system packed a 1-2 punch over the span of a week—these dates you can lookup 10/10, 12/8, 2/4/20, 4/4, 6/2. Look at the daily weather charts at the 500mb for those dates. https://www.wpc.ncep.noaa.gov/dailywxmap/
This years cycle length and storm track is establishing now, by November I’ll know which resorts will have the best snow, and most importantly, when to plan on vacation days for Future Powder!

As for crowding in the backcountry, most bc skiers and especially new ones don’t go far from the trailheads. I welcome our newbie overlords to this most noble of sports. The ongoing popularity of bc skiing is the reason that our gear has improved so much over the last few decades starting with the Dynafit Tech binding. I need all the help I can get.

Having said this, I’m dreading trails out of the trailheads made unpleasant and even dangerous with booted post holes. Every year a few energetic enthusiasts make a mess of the trails. This season, maybe a lot more than a few. With all the money they save not buying lift tickets, they can acquire gear suitable for touring. Sell or give away your unneeded ski gear! Save the trails!

Perhaps it’s time to think of new variants of old winter sports. How about bc ice skating? Skating up and down frozen rapids sounds like tons of fun! With the right equipment. Wear your helmet.

“there will be snow, we will have fun”… t.mac – ShotMemoryMountaineers

Anyone heard anything about the resort upholding status next year? Bet that will also be super busy, if allowed…

If a resort is smart, it will expand its Uphill Access program for 2020-21. The parts of the resort with real germ-spreading potential are the lodges, the lifts, and the lift lines; being on the trails is relatively safe. If government entities limit a resort’s capacity to, say 500 or 1000 users, the resort should make the distinction that those numbers apply to lift-riding users. The resort could offer numbers beyond that by allowing users to ascend the hill under their own power. Not only does this open potential new revenue streams (passes, rentals, lessons), but it also softens the blow on powder days for the passholders who didn’t happen to book that day weeks ahead of time. They can still at least get on the mountain.

I would argue with a previous comment that BC skiing exploded as the gear improved, rather, the gear improved allowing average skiers to get into places they never dreamed of going, and maybe shouldn’t go given their lack of mountain-sense. When I started BC skiing in the mid-1970’s the gear sucked, skinny (65mm) and long (200+ cm) skis, soft leather boots, 3-pin bindings with no spring tension, but there was a core of skiers that didn’t let bad gear stop them, and they got good on bad equipment, driven by the desire to get away from the crowds. A good skier could still have fun on archaic gear. To be sure, there were many who tried BC skiing once and never went back because, let’s face it, a bad skier on archaic Tele-gear could link maybe 2 turns then yard sale, repeated all the way down the mountain. After one run they were exhausted and miserable so they skied lifts forever more.
“There are no bad skis, just bad skiers.”

No argument, OMR. It’s a chicken and egg situation. Improvements in gear attracted more skiers to the bc, and that enabled more improvements, and so on.

I was one of those persistent fools who tried repeatedly to make tele turns in deep powder with long skinny wooden cross-country skis with no side cut wearing soft leather slippers. Somehow I had what I then called fun. The technical term for that now is Type Two Fun.

Tele gear got progressively better — and heavier, while alpine touring gear got progressively better — and lighter. Since alpine technique is inherently easier and stronger, AT gear in the backcountry became dominant. However, I applaud the few remaining, proud telemarkers. They persist. Telemarkers preserve an important part of skiing history, while having some Type One Fun.