The Recon BT, not the little “AL” below the battery level indicator on the left of the screen, denoting that alkaline batteries are being used.

The Recon BT keeps it basic with a few key upgrades

I’m ashamed to say that I’ve undoubtedly waited too long to update my beacon. In my defense, my old Pieps DSP has been my trusty companion for years, and hasn’t let me down once, nor has it ever failed a frequency check or had anything else happen that would indicate it was worn out. On the other hand it was, well, old. Better late than never, I guess. I’ve been a fan of Pieps beacons from the start, (I even had an old analog yellow Pieps when I was a kid), and it was a bit of a no brainer to give their latest product a try, in the form of the BD branded Recon BT.

The Recon BT is Black Diamond’s latest evolution of their beacon line. The same beacon (in a different color) is also sold as the the Powder BT, under the Pieps brand. The Guide BT (the Pieps Pro BT) costs about $100 more than the Recon, and has some more features. I won’t get into everything that is different between the two, but most of the added features on the Guide aren’t related to the actual beacon search functions, with the exception of the scan feature. I have the scan function on my older Pieps beacon, and I haven’t found it useful in a real life search scenario. So, I opted for the cheaper Recon this time around.

I appreciate the fact that Pieps/BD have kept the overall design and user interface of their flagship beacons consistent through the years of iterations. Although it’s not a “feature” per say, in a sense it is. The user interface hasn’t really changed at all; all the buttons have stayed in the same places, and they use the same icons and nomenclature that they used on the very first Pieps DSP. I’d like to think they do this because they’ve found a system that works, and they are continuing to build on that design. Or, for the cynics, perhaps this is a natural consequence of corporate cost-saving. Either way, the result is that I feel fairly confident that I can pick up any Pieps/BD DSP or Recon beacon from the last 10 years and cruise through a beacon search like it’s my own. This is in contrast to some other beacon companies that change their user interface up with no obvious benefit besides providing job security to reps and ski shop employees. Although this consistency isn’t entirely unique to Pieps they do deserve kudos. The Pieps evolution, from the 10 year old original DSP to the DSP sport, and now the new Recon BT. Note: the on/off switch on the DSP Sport has since been identified as a potential hazard, as detailed here. I prefer to keep my beacon in my pants pocket, but for those of you who use the harness, it’s mostly unchanged from the previous generation.

On the other hand, there are a few things that I wish were updated. The biggest oversight in my opinion is that they have kept the 3 bar battery level symbol. That’s in contrast to most other beacons that give you a numerical percentage to show battery life. I believe the rationale for this is that since the percentage isn’t that accurate anyways, it’s better to show a rough, non-numerical symbol rather than numbers that could be misleadingly precise. I do see their rational, however I’d personally rather have the numbers. At the very least, this would be a nice thing to be able to change in the settings.

Although the beacon has many elements that are unchanged, there’s of course several updates and new features in the Recon BT. Progress marches on.

Perhaps the least sexy update is the new off/send/search switch. The switch appears similar to the previous generation, but a major flaw has been fixed. The switch on the older Pieps DSP beacons could get inadvertently switched off while in its case. (Editor’s note: this may have caused serious incidents, as detailed in this article. If you have a Pieps DSP Pro or Sport, Pieps is offering replacement upgrades, dsp@pieps.com) I’m happy to say that the new design appears to have entirely fixed the problem. The button to release the slider has been replaced with another sliding button, perpendicular to the main one. The new switch is much more resistant to inadvertent operation, but also makes the beacon more difficult to switch on and off, especially with one hand. I’ll take that tradeoff. The most obvious update: the new off/send/search switch, much improved from the previous version while retaining the same user interface. Nice. I did find the new switch slightly difficult to operate one handed, especially with gloves on. Not a big deal at all, and a welcome trade-off to have a more secure switch.

As a side note, I’m still partial to the sliding button on the original Pieps DSP. It had the benefit of “sticking out” above the surface of the beacon when the beacon was off or in search mode. This meant that I could easily tell if the button was in the right place by touch, even through several layers of jackets. A super nice feature, perhaps an idea to reintroduce in the next generation?

There’s an inexorable trend in the electronics world of replacing cords with bluetooth, and I’m not a fan, usually (does that mean I’m old?). I’m still holding out hope that the iPhone headphone jack will make a comeback, but I’m starting to think it’s hopeless. I wasn’t exactly excited when I heard that the big new feature of the new Recon beacon is its bluetooth connectivity. I mean, how hard is it to connect a cable once a year for a firmware update?

However, I’m happy to say that my mind was changed (at least about beacons, you’ll pry my wired headphones from my cold, dead hands). The Recon’s bluetooth isn’t a gimmick, and it actually serves to significantly improve overall user experience. What they’ve done is made it so the only way to change any settings on the beacon is through the app, there’s no way to access any of the settings on the beacon. At first that might seem like a bit of an odd design choice. The advantage of that is that there’s no way to accidentally get into the settings menu, or inadvertently change settings on the beacon itself. This simplifies the user interface of the physical beacon, and makes it easier to use in an emergency situation, or by a beginner.

Personally, I hardly ever change the settings on my beacon once I have it set how I want it. Even when I do, I need to look at the manual anyways to navigate the confusing acronyms and abbreviations in the UI. The one major exception to this that I’ve found on the Recon is switching from using alkaline to lithium batteries. I could definitely see the need to change that setting in the field, for instance if I need to switch out dead lithium batteries to alkaline after leaving the beacon on all night accidentally. All that being said, It could definitely be argued that there’s still a reason to keep that setting difficult to access. It could be a major issue if I inadvertently switched the battery setting, because that would give an inaccurate battery level.

The bluetooth process works quite well. The beacon connected right away, and the app is intuitive and seems well made (I tested the iphone version). The settings are all fairly self-explanatory and easy. The one thing I would love to see added to the app would be a simple manual for the beacon, it’d be helpful to have access to the instructions and troubleshooting tips from my phone. 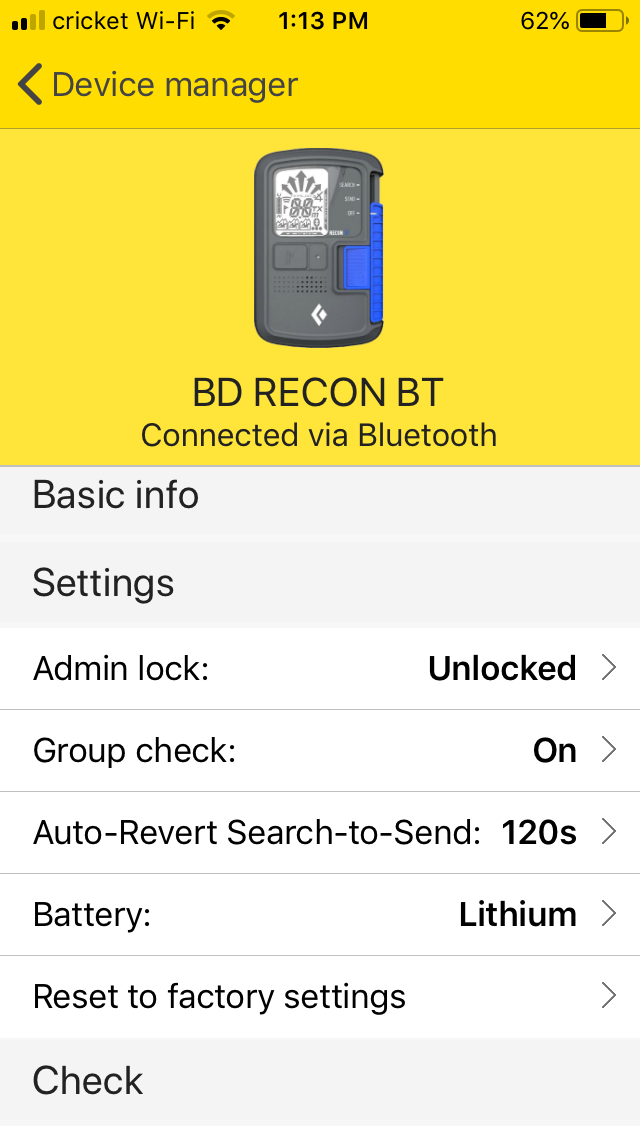 This is what you see when you connect your beacon to the app. Simple and straightforward.

The app can also be used for beacon training. The beacons have a “training mode” that can be enabled with bluetooth, and then can be controlled from the app. I haven’t explored this as much as I would like, and I’m not sure how useful it is, but I’m looking forward to trying it out this winter once there’s white stuff on the ground I can bury beacons under. One potential downside is that the training mode requires several bluetooth enabled Pieps/BD beacons.

I’m sure the Recon wouldn’t be offended if I called it “basic”, and no, I don’t mean it likes PSL’s and Uggs. When I’m talking beacons, being basic is a feature, not a bug. I appreciate a beacon that’s no frills, easy to use, and focused on the main job: avalanche rescue.

My beacon is probably the same vintage as your Pieps DSP. How long should you use a beacon before it’s old enough to replace?

Rule of thumb for everything in the outdoors is to replace it after 10 years.

Bluetooth on a beacon? I thought wireless signals like that were best kept away from beacons so as not to mess w/ the search modes.

Eric- There doesn’t seem to be a general concensous on that. I’d say if your beacon is older than 5 years, make sure you check the range and accuracy fairly frequently (at least a few times a year), and especially if it’s been dropped or hasn’t been used in a while. If it’s older than 10 years it’s probably time to replace even if everything seems fine. Another good indicator is if the technology has progressed in some significant way.

Does it start to beep if you accidently leave it on overnight?

I’m not sure about that, I don’t see anything in the manual about that, or in the settings, but I’ll leave it on overnight to check, and let you know what I find out.

Thanks Lou! My Tracker 2 and now Barryvox have this feature which has saved my battery a few times. Neither seem to address this feature in the manual though.

I have DPS sport, have you tasted differences in reach distance or in fine research Speed? I think sport Is very fast in first research phase, bat slower than some other beacons in fine research.

I was about to buy this transceiver from backcountry.com when I came across an interesting and very negative review. The reviewer cautions anyone away from buying this unit, saying that the only thing keeping the sliding switch in a fixed position is the tiny little plastic pin that sticks out from the lock button and inserts into a referencing hole. They say that in a bad crash or avalanche the victims transceiver could very easily be switched from send to search or off because this tiny pin is prone to snapping off or getting jammed sideways. Please check the review out on backcountry.com as I’d love to hear your thoughts on it! Thanks

Pieps Micro Button – much much smaller, has all the features you might need. And it is smaller 🙂