Hot ski mountaineering becomes a race against the clock

After looking at my watch and feeling the heat of the sun beat down on my hood and hat, I knew we were behind schedule. In spring, the timing of when snow thaws enough to ski but remains safe enough to descend is a game that I play aggressively, sometimes to my own detriment. I’d played it badly that morning, letting my brain bargain those few extra minutes of rest after the alarm rang.

As Manasseh and I climbed the east face of Mount Hood earlier, our skins were velcro to the plush of the quickly thawing snow. They clung to a skin track that cut switchbacks on the 40 degree slope, allowing us to make good time and gain hope. But, when we switched to crampons, my first steps plunged with my aspirations into the lower layers of the warm snow. And as I plodded ahead, staggering knee deep in unsupported steps, I knew we were definitely too late. 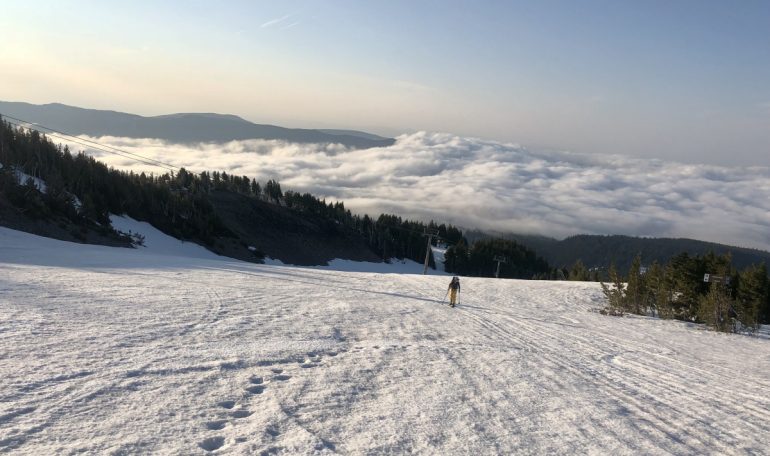 Skinning up through a classic PNW inversion as we leave Mount Hood Meadows behind. Boot packing through a thin stretch of volcanic rock before the mountain pitches steeply up.

During two years I lived in Portland, Oregon almost a decade ago, Mount Hood was a haven above the clouds during dreary Northwest winters. She would sit there, ironically obscured by low hanging ceilings of clouds that would give way to bright sunny days. Hours of driving were rewarded by nearly un-skiable high alpine snow and ice. Summits were rare in the winter, but the big mountain feeling always kept me company. Ski mountaineering was new and motivation was high even on the never ending treadmill of the Palmer snowfield during lonely dawn patrol mornings. The maritime snowpack and wind hammered slopes offered the ability to ski alone in a way the Rocky Mountains never did.

This intense bond of repetitions with this peak has connected me in a way that few mountains in the world will ever rival. I can’t take a ski trip to the Northwest without attempting another summit and one its many skiable faces.

The Newton Clark headwall towers over the glaciers that bear its name on Hood’s east face. When you look at a ski line head-on it often looks steeper than it actually is, but if it looks steep from every other angle, too, it must be so. As we neared the top, we realized just how steep it was, and just how far we had to go.

Before you go to all points on climbing it is nice to take a break, get some food and gather yourself for the final push. All of these luxuries were forsaken for a few extra minutes in bed that morning far below. Instead, we hastily powwowed on a small saddle below the top and I charged ahead. Switching to crampons as we approach the summit ridge.

As we pulled into the last steep pitch just a few hundred feet short of the summit, we surpassed our crucial margin of error. A rocky face with a thin strip of dirty mashed potatoes beckoned us upward, but when we attained the ridge with a steep chossy down climb below and spotted two climbers traversing back to their skis in the saddle beneath us, we realized that this final wrong turn had cost us the summit.

On this bright and hot sunny day, one skier had successfully lugged his skis to the top of the seemingly melted out and but apparently skiable line. He hooted and hollered down a dirty ribbon of snow just out of sight, briefly came into view and disappeared over the steep rollover below. Nervous about the snowpack below, we transitioned fast and gave pursuit.

My first ski cut of the slope sounded like the breaking of so many champagne glasses that I had come to associate with bad timing and bad conditions in the mountains. As I stopped to let the stream of tinkling glass slide by, I searched for confidence that the slope would hold together for the final minutes we needed to descend. I hid in the meager shadow of the west leaning edge of the couloir through the steepest turns. Manasseh followed me to our rendezvous, visibly shaken. There was nothing to do but pull together some composure and ski to the safety of gentler slopes below us.

Runnels and rotting snow on the ridge. For those looking for beta, the correct move was to traverse north before climbing the ridge.

I spotted cracks in the glacier as I pulled out of the headwall and onto the mellower terrain. Right when I was about to breath my first sigh of relief, a rock came hurtling off a cliff nearby, shattered and cascaded down the snow. My nerves bounced back on high alert. Manasseh caught back up to me and we finally enjoyed some amazing corn turns as we pulled away from the summit’s steeps.

Safely back at the car, my watch revealed that we were just 200 feet short of the summit, but not short of full value ski adventure. How do you deal with coming up just shy of skiing a classic line? You go to bed sooner, wake an hour earlier, and try another one the next day.

Want more from this trip? Have a listen to Totally Deep Episode 62.

Totally Deep Podcast 62 — Strikes and Gutters in the PNW

Tips to Build That Ski Touring Base

Great trip report. When were you there? I tried to ski it in June but the chutes through the rocks were already pretty bare.

Steve: we were up there just after Memorial Day, so probably a little before you. One guy did ski from the summit that day, but it looked questionable as to whether there’d be a clean line a few days from then.

More on this classic: https://www.oregonlive.com/travel/2009/11/first_descents_hes_boldly_skie.html

Sedgesprite: that’s some pretty awesome historical context. Helpful too to read about the difficult route finding. Begs the question of how much routes can change over time…

Hi. This coverage is great. I love the stoke and new ideas moving forward, and I feel like the new design in general is an improvement. I did want to point out one possible issue. It must be nearly impossible to make sites that load and look good across a variety of devices and browsers, but at least on my set up, A Macbook with OSX, there is a huge amount of empty white space to the right of the main article at the top of the page. The white space itself isn’t so bad, but that’s where the most recent comments used to go! I really appreciated those recent comments; they helped me get a sense of what kinds of conversation were taking place, and they highlighted what is perhaps the most amazing thing Lou created–the community! Maybe it’s an impossible ask, but my request is, “Bring back the comments on the top right side of the page 🙂 OK, thanks for your great efforts, and carry on.

Thanks for the feedback Bruno! The site should look great on any IOS device. I talked it over with Lou and we think a tablet from Apple may have an automatic ad blocker that makes our tasteful ads appear as white space 😉 I will look into bring back the recent comments. I have been looking at doing it with and option to see what post the comment it is on instead of the comment itself. It was tough to know from the other layout what rabbit hole you were going down until it was too late.

We will keep the tweaking going.

Nice job on this Doug! I’ve always loved Hood, had many “formative” experiences up there.

Bruno, indeed, I worked for years on cross-browser compatibility and load speed for WildSnow. It’s really tough, and unless you use a non-responsive site (as our old one was) it’s pretty much a compromise. The non-responsive fixed width site is also not ideal, as people dislike the way it doesn’t fill their screen, and tends to get weird on mobile devices. I think we’re on the right track getting with the modern age and a responsive site, but it’s clearly going to take some work to get the best compromise.

You’re right about the community being so important. I’ve loved how all you guys always stepped up and offered useful, entertaining and thought provoking comments. You made WildSnow what it is! I know Doug is working on how to keep those “recent comments” more obvious. Stay tuned, we’ve all got some ideas about it.

Thanks–like I said, I’m sure it’s not easy. I don’t know what is worse–trying to make websites that work well across many platforms, or trying to introduce changes that make regular uses surprised/uncomfortable. I imagine that, whatever you do, somebody will like it, “The old way,” or “The other way.” Just do what you think is best: we will adapt 🙂