All the gear for an expedition to Denali.

The West Buttress of Denali is not where you find solitude or mystery. Each spring, more than a thousand people attempt the climb, a number that has remained roughly the same since the mid ‘90s. As for the route itself, fixed lines and climbing anchors are installed on most of the exposed sections. Like the standard routes on many of the seven summits, it is routinely criticized by serious alpinists as a tame “walk-up,” best suited to guided clients who pay to check it off their bucket lists.

A search for “Denali West Buttress” on YouTube produces dozens of videos, all of which will give you a good sense of the experience at a much lower financial, physical, and emotional cost than the real thing. I knew all this, and had even watched some videos, but I was not deterred. Solitude and mystery might be extinct, but the mountain had plenty to teach me.

The day before our departure I laid out my gear on the garage floor and wondered if it was possible to carry it all up a mountain. Conveniently, the airline weight limit of 50 pounds per bag was similar to the maximum I could imagine placing on my body. The challenge wasn’t deciding what to bring, but what not to bring. I supplemented a basic gear list with ski-specific equipment, group items, and essential foods that I thought would be difficult to find in Anchorage, such as powdered chai lattes and tiny smoked oysters. I packed, unpacked, and repacked three times until each bag weighed 49.8 pounds. Then I zipped them closed and spent a sleepless night thinking about everything I might have forgotten.

Early on May 22, Brandon and Mike arrived at my house with their luggage. The three of us have been skiing together, and talking about Denali, since we met a decade ago and worked together on the salesfloor of the Bellingham REI. We named our team the Baker Ice Worms in honor of our home mountain and the purple-headed creatures unique to the glaciers of western North America. After a final gear check, we motored south to Sea-Tac Airport.

I felt the stress of anticipation fade as we got farther from home. No more planning or training. Any problems that arose were part of the adventure.

The first order of business in Alaska was shopping. We planned to carry 25 days of food, and we could stretch this or collect extra food from departing teams if we needed to stay longer. Except for personal snacks and some dehydrated lasagna that Brandon’s girlfriend had made for us, we bought everything at a Fred Meyer two blocks from our hotel. The shopping spree lasted four hours and cost more than $500, which sounds like a lot until you consider how much bacon and whiskey three burley guys can consume in a month. We wheeled an overflowing cart onto the lobby elevator and stayed awake past midnight to remove wasteful packaging and organize the food into equal loads.

Our Go Purple shuttle was waiting in front of the hotel at eight in the morning. The loquacious chauffeur entertained us during the two-hour drive to Talkeetna with questionable Alaska factoids: graphic stories about car wrecks, frostbite and plane crashes. He dropped us at K2 Aviation and wished us good luck.

Next was a sobering National Park Service orientation with climbing ranger Mark Westman. With the slightest smirk, he told us the sastrugi at 14 Camp was so hard and thick that the best tool for cutting tent platforms was a chainsaw. We asked about skiing and the look on his face said it all: pray for snow. After a final round of organizing gear, we were ready to fly to the glacier. The weather at base camp wasn’t cooperating, so we spent a night at the historic Roadhouse.

It was cloudy the following morning and we milled around town until 5 p.m., when we finally got the call we had been waiting for: clear sky; time to fly. We squeezed into a de Havilland Beaver and sailed over the melting tundra toward the distant white mountains. I barely fit in the copilot’s seat and whenever the pilot turned the yoke sharply it would bang into my knee. The view was spectacular, however, and after a smooth landing, we were standing on the gentle slope of the lower Kahiltna Glacier. The sound of blaring engines soon died away, and we were left to enjoy the stillness of the mountains. In the copilot’s seat of a de Havilland Beaver. Unloading our equipment at base camp.

For our first night, Brandon made Philly cheesesteaks. Mike and I noticed that his sandwich had more meat than ours and we accused him of shorting us. He explained defensively that he had taken the smallest hoagie, which made it appear fuller. Likely story.

Day 2 was clear and surprisingly hot. After burying a small cache, we were the last team out of camp. Our packs and sleds weighed 60 pounds apiece, but we made good time skinning across gradual topography to our next camp at 7800 feet. The views of Foraker, Hunter, and Denali were stunning, the wealth of inspiring terrain, limitless. 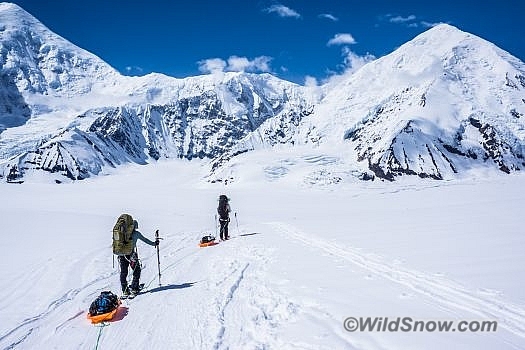 First day on route. Skinning from base camp with full sleds and packs.

Dinner was an enormous pot of rehydrated lasagna. Mike and I complained about having to force the final sporkfuls into our swollen bellies. So far, ill-proportioned meals were our biggest problems.

From the 7800-foot camp, most teams carried a load to a cache near Kahiltna Pass and returned that evening, but we decided to move everything to a rarely used camp at 9600 feet. This camp was known to be very windy, which produced a beneficial side-effect: solitude. Only two other tents joined us that evening. One contained a pair of Swedish climbers, Stefan and Kenneth — team name: the Swedish Vikings — who we had met at our orientation. We watched the sky fade ponderously from brilliant blue to purple and orange. I imagined it was 1960, the year my father and uncle climbed Denali. For a brief moment, I felt their isolation. Sunset on Denali from our camp at 9600 feet.

We awoke to eight inches of fresh powder and savored our pancake-and-bacon breakfast, giving other teams a chance to set the track. Having come from sea level three days ago, I felt fatigued as we pushed toward 11 Camp with full sleds and packs. 11 Camp with Motorcycle Hill in the background.

We rested the following day and each consumed no less than a dozen hot drinks. In the evening, we hung my iPhone from the ceiling of the tent and watched an episode of “All or Nothing: The Dallas Cowboys.” Brandon, a lifelong Cowboys fan, explained how the team would win a Super Bowl while Mike and I criticized the players, coaches, and team owner. I was reminded of what Dave Hahn had once told me when I asked him what Denali was like. “Denali is easy if you can watch TV every night,” he had said jokingly. Fair point. Climbing above 11 Camp with Mount Foraker in the distance.

Day 6 was our first journey to 14 Camp. We skinned the entire way except for one icy section near Windy Corner. Most teams placed their caches at about 13,500 feet, an hour below 14 Camp, which meant they would have to “back carry” on a rest day to retrieve them. Wanting to spend our rest days actually resting—or skiing—we went the extra distance and cached on the edge of camp. After a few deep breaths of thin air, we ripped our skins and had a magical ski with light packs and no sleds back to 11 Camp. The bulletproof sastrugi Mark Westman had described was imperceptible except for a few small teeth hidden beneath the pow.

On the day we moved to 14 Camp, we were, as usual, the last team to depart. The busy slog up Squirrel Hill seemed to take forever, but the hardest part of the day was constructing camp. A few seconds of sawing or digging left me sucking wind. It was past 11 p.m. and the temperature had dropped to minus five degrees Fahrenheit by the time we were ready for dinner. Nevertheless, we were ecstatic. We had made it to 14 Camp in eight days, right on schedule. The recent snow, however, had failed to stick to steeper terrain. All the lines we had imagined skiing — the Rescue Gulley, Orient Express, West Rib, and Messner Couloir — were visibly blue. Skiing any of these would be a matter of survival rather than enjoyment. We held out hope that conditions would improve.

In the meantime, we carried a load up the fixed lines and along the exposed rock of the West Buttress. With a mild tingle that ran down my spine as I balanced on a steep pitch beneath Washburn’s Thumb, it was some of the most enjoyable climbing of the expedition.

I made fun of Mike and Brandon for wearing their nose guards, as I had done ever since the planning stages when Brandon asked if I was bringing one. “I didn’t need one of those stupid things on Everest or Vinson,” I had said. “Why would Denali be different?” But I had surreptitiously purchased one, just in case. 17 Camp. The bootpack is visible cutting across the Autobahn to Denali Pass.

After seven hours of climbing, we buried our cache at 17 Camp and descended, skiing the last thousand feet from where we had left our planks at the base of the fixed lines. As we prepared for bed, I looked at myself in the mirrored lens of my sunglasses. Oh no! My oversized Whittaker schnoz was so burned that tiny white spots had developed amid the lobstered skin. The worst part was not the pain or potential disfigurement, but the fact that, to protect my snout from further damage, I would have to wear a nose guard for the rest of the trip.

as a wannabe/cube dweller, this is a great read! psyched for more.