(This post sponsored by our publishing partner Cripple Creek Backcountry — check them out if you’re shopping for Tecton or Evo.)

Going toe to toe with a Fritschi Diamir Tecton Evo toe, a few pin punches and a torx bit got us to the guts. In pictures. (Since this toe is identical to Fritschi Evo, for the purposes of this article we’ll often term it as “Tecton Evo.”) As the Tecton toe unit (or Evo) looks before the nefarious deed. Charles Darwin wrote something about this, didn’t he? How assembled living things are greater than the sum of their parts? The boot toe bumps the binding boot-toe-bumper, like this, when you’re touring. Issue brought up elsewhere on the web is this can damage boot toes, depending on how hard one goes forward in a “knee fall” and what kind of plastic the boot is made from. We tested with Pebax boots. After burying the binding bumper into the boot toe plastic, the boot toe rebounded with a few small divots. Apparently boots made from Grilamid plastic don’t fare as well, though damage can be heated and pushed out. Happy to entertain questions about this in the comments, but let’s move on to the real destruction! Off it comes. (Yes Virginia, we did test boot forward motion in the Tecton (Evo) toe with this removed, it only went a few degrees farther forward and had the serious detriment of not releasing out of the binding in downhill mode, as the stock configuration is designed to do.) As you can see in this photo, I ground down the material where the bumper rests on the Tecton Evo toe. Didn’t make much difference in how the boot and binding behaved, so moving on…I drove the pin out of the toe lever and proceeded with vivisection.

I’m beginning to think beyond Darwin, Swiss watch? Flipping the binding upside down, I removed two small torx screws with a #1 driver. Off comes the toe lever, metal tab indicated by arrow is how the lever interacts with the main binding parts. Plate removed, revealing what is easily the most awesome collection of mechanical engineering to ever grace a ski touring binding toe. The lateral release toe carriage comes out quite easily. Something like a gutted fish? Or, filet of Fritschi? Coming in closer to assuage your lust for technicality. This is the series of linkage cams that ties the toe carriage to the release spring and piston. At this point in the process I began to feel as if I was witnessing the legendary lost machine of Archimedes. Instinct led me to the toe carriage, its propenerance of parts tempted the dissectionist in me. Driving pins out released the toe pin mounts from the carriage. 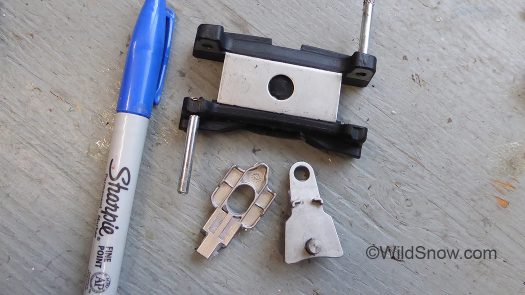 Could I evolve the dissected Tecton Evo toe back together? Perhaps, if my life depended on it, but I’ll pass on that for now.

Overall impression: Clearly the most intricate touring binding toe available — by a quantum jump. The complexity is due to Fritshi’s effort to combine use of toe pins with a lateral (side) release at the toe. It’s amazing they pulled this off, but not without compromises such as the lack of boot forward release while binding is locked in touring mode. Not only with the Fritschi models, but other companies as well, a tendency in binding design is the attempted integration of features (rather than separation). Examples being brakes that semi-automatically lock up when you go to touring mode, not to mention extra parts and pieces added to allow shifting between uphill and downhill mode without removing your boot toe from the binding. Considering all this, I remain impressed by the basic simplicity and proven performance of the “classic” tech binding form factor — even going so far back as to use the rear “U-pin” type heel springs. But those basic designs do have problems. Only question is it worth solving those problems by adding cost, extreme complexity, possible failure points, ice sensitive components and so forth? Only time will tell us what is what on that — as well as each skier’s needs being somewhat unique. Meanwhile, kudos to Fritschi for their leadership innovation with the Tecton and Evo toe unit, as well as the Tecton heel.

wasn’t a “toe bump” the death knell of the Silvretta Pure binding a few years ago?

Whatever happened to Silvretta?

“Only question is it worth solving those problems by adding cost, extreme complexity, possible failure points, ice sensitive components and so forth”

My knees and health are worth way more than a couple hundred grams unless it’s racing, or longgg trips where the distance is more the objective than fun skiing. And that’s coming from someone in their 20’s.

Hell having the binding perform way better in a downhill performance manner is almost worth it alone considering the weight vs an average tech binging (vert or ion).

This is my second season on the 2015-2016 vipecs (previous toe bumper iteration but otherwise seems very similar) bought on clearance last spring.

My bindings are considered more difficult to step into with the previous bumper iteration but I found the trick is to clear snow from the toe of your boot to expose the metal circles from where the metal bit is that holds the toe pins. You then line those metal circles on the boot up with the pins on the bindings and VIOLA – step in success on the first try every time.

Other than that initial learning curve, the toe piece has been flawless and I have appreciated the lateral release for those times I get too friendly with tree trunks. I don’t ski as much as many folks and probably have 30-40 days split between two pairs of skis with the same bindings.

Cody, I tend to agree, pretty amazing what Fritschi did with this. I just wish they’d divorced the brake and thickened the plastic here and there, and perhaps allowed a few more degrees of boot pivot in touring mode. Not that the latter would prevent the boot hitting the bumper eventually, but it wouldn’t be tapping it so much during things like deep trail breaking. Lou

Impressive. But too complicated for me. Too much that can go wrong. I’ll stick with my U springs.

Thanks for reviewing these bindings.

Having skied them hundreds of times in the last 3-4 yrs, I can honestly say I have not had one mechanical failure or issue. Including the forward toe release without any damage to several different models of boots. The only other binding I’ve personally used with this kind of track record was the Plum, which is an excellent binding other than the rather un-elegant heel for/aft adjustment. I lost track of the number of broken parts I had with Dynafit the first ten years of use. Yes, the first years version of the Vipec was tricky to get in to, but if you couldn’t figure that out, then maybe you should question your ability to safely drive to your ski destination- it’s really not that hard. The current version is as easy, or easier, to use as any binding.

I like the features; safety release in climbing mode, lateral toe elasticity, lateral toe release, easy step in, functional and easy to use climbing posts, easy transition from tour to ski mode, non rotating heel, strong, easy to install, and adjustable height ski crampons, and a very solid heel hold. Not to mention that they will consistently release at the same torque and RV using a high quality, and accurate machine. Something many other bindings will not do, if you actually test them. All, at a reasonable weight. I don’t use the brakes because they aren’t effective in the terrain I ski, so I have no experience with them.

If these interest you, put some days on them and then determine if their complexity really manifests any breakage, or if that’s just speculation. In my experience there has been zero breakage and just enough complexity to provide the features I value.

@Cody I think you are spot on. Safety in release is WELL worth the additional effort in design and in weight. I fully agree that a blown knee is not worth the weight savings on most trips.

I tried a friend’s Fischer Travers Carbon in my Tecton toe and the toe bump issue is there as well. Is this a Beta Max vs. VHS battle looming or will someone figure this out? Also, I have found better toe side to side function on my Vipec & BD Quadrant kit if the pin(s) are adjusted outboard a turn +/-. You made no mention of Tecton pin adjustment. (And I assume you adjust everything whether it needs it or not.) (That is a compliment!)

That looks like a lot of grease in the cams, how/does it need to be replenished?

Agree with Chris, having skied a couple of hundred days on two versions of Vipecs. No failures of any sort, likely since I amputated the brakes. Toe bumps while climbing steep icy traverses have not hurt my Atomic BCL boots (grilamid?). Bumping the toe is better than losing the ski. If caught in an avalanche while ascending in walk mode, the ski will probably release laterally, I hope. Why not?

I really like the ease of switching between walk and ski modes without dismounting. The impossibility of auto-rotation is another plus. I wish they were much lighter than average, but you can’t have everything.

Lou, any thoughts on improving forward pivot by grinding down the Step-in Toe guide (area at the green sticker) and the toe Bump Release? i would love for the TLT8 boot to work with my Vipec Evo 12 (18/19 MY, improved toe bumper) but in walk mode the boot toe hits the Step-In toe guide at 41* (ha- not even the bumper release) but in ski mode boot hits bumper at 30* (which is a positive since in a ski fall my heels out so the sooner my toe releases the better). This is by far the worst of 5 boots I tested (Procline, TLT8, Hoji Pro, TLT speedfit, Maestrale RS.
I mocked up the binding and TLT8 to get measurements and play with it to get an idea of what moves and contacts what. In your photo removing the toe bumper by removing the pin, did you see the arched path/slot that pin travels in? (seen easiest by putting lever to stepin mode and freely moving the toe bumper) The arch nearly reaches the green stepin guide. also seen from the top is a single slit for the return spring that wraps the pin. Below the pin on the toe bumpers lowest point are the tabs that clamp the bumper to the toe guide. Thankfully your pic shows me that they seem somewhat insignificant. So does that mean the pin traveling the arch is where the force of the boot pressing on the bumper for release is exerted? Furthermore, in the opposite, the pin hitting the end/top of the arch path could be strong enough to stop the rearward travel of the toe bumper when going from stepin to ski?
A big concern is removing too much material from the green area of the guide to allow better boot rotation but weaken the stopping potential of the stepin guide at the top where it looks like an overhanging header. The earlier versions that did not have the bumper or stepin guide looked like they had plenty of room for the TLT8 to rotate but those had other issues I guess.
Its probably unlikely to put it all back together to test grinding the stepin guide. Any chance you have the other toe binding to take a ‘crack’ at it?
Thank you for any further information
Sean