In Austria, What Goes Up Goes Down

Whether it’s the Weissbier or WildSnow Louie, stuff in this country goes down. This is a story in pictures about an American guy, Austrian friends, a train, a bit of snow, lots of cameras, and a gasthaus. Japan or Austria? The guy is attempting to figure it out.

Louie and I have been on a furious journey through Greece. The combination of skiing, driving and sightseeing was amazing, but we’d been hauling huge ski bags all over creation and not using them near enough. We had tickets to Austria, where we were told there was virtually no natural snow and people were skiing on “white stripes between fields of green grass.” I suggested to Louie we could do office work and visit museums. He said his travel insurance could change his ticket home to an earlier flight. Days earlier. What could I offer in response to that except a nod?

Then it snowed. We toured one day with friends in the Kitzbühler Alpen; next day just the two of us returned for dessert. In the tradition of internet trip reports with WAY too many photos of ourselves, can you make it through to the end? On the train from Munich, will there be snow, or grass? Louie contemplates the meaning of life. Starting the skin through fresh snow and farmhouses. Classic. There is grass down under there somewhere. Waxing for it is an art. I liked the light, trees and shadows in this zone. 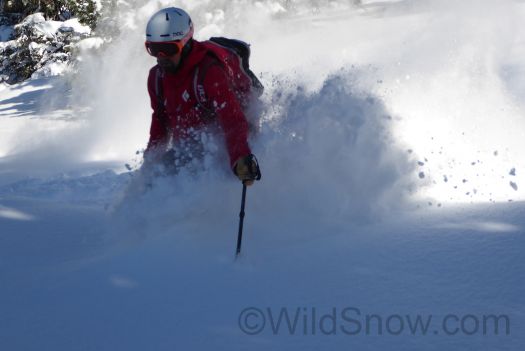 Experimenting with my new Lumix has been fun. Tricky to use as a ‘real’ camera for ski photos, always fighting its compromised ‘brain.’ Old farmhouses and powder make for picturesque ski touring in the Tirol. Yes, we are tourists. Is that a problem? His Blogness is the skier. Photo by Louie. Headin’ home, or at least to the hutte. Gasthaus culture, Tagessuppe, and Weissbier athletic recovery drink especially formulated by Bavarian monks. Louie says ‘I could get used to this.’

I figured I’d take the plunge and get a balloon pack, and went with the Float pack and air gun pump system. Any tips on traveling with the pump? It seems like the hose could be easily damaged where it exits the base of the pump.

See, we made a simple mistake and didn’t bring a refill “kit” with 0-rings, now our pump is just dead weight. So that’s the tip, bring extra 0-rings for the cylinder. Some day, I’ll actually witness someone doing air travel with a gas airbag system and it not being a hassle (grin). Lou

Nice! I was having trouble moving through all the snow last weekend. Too much to stay on low-angled stuff, too dicey to move onto the steeps.

We’ll see how it goes tomorrow!

When did you go in Austria?

Hallo Louie,
I take that train every day that I work like ski instructor, so I have immediately recognized.
But now I have one day free and I want to go Skitouren in Pulverschnee.
Where have you exactly find this wonderful pastures powder?
I am a Foreigner that live in Inntal so I do not know well the area.
Liebe Gruße Stefano

DONT GIVE AWAY THE SECRET STASH!

Welcome to Austria! So it was YOU who brought us the snow after all that summer-hiking we had to do in December… 😉

Will you take part in the Kitzbuehl-race-weekend madness? (I mean, like “will you BE there”, not “will you compete at the Streif” 😉

Louie/Lou poaching The Streif on tech bindings would be awesome!