We reached Leirvassbu Mountain Lodge here in the Jotunheimen Mountains of Norway after a fairly tame ski from Spiterstulen (see previous posts). Stian had been promising a cultural event. We were not disappointed.

This Norwegian kid was already very nationalistic in his dining habits. That’s a waffle. Everywhere you go they make waffles. You slather with goodies and munch down. One thing I liked about Leirvassbu was the combination of it being a family destination as well as a base for more hardcore ski touring. In terms of the demographic in comparison to the Alps, most noticeable difference was fewer folks in their older years.

Marker/Völkl got me here to Norway to simply try some gear and blog about a nice ski tour, or so I thought. That idea turned out to be excellent, but let me tell you I am now double wowed. Leirvassbu Mountain Lodge exploded my skiers consciousness like like a Viking battle ax cleaving my cerebellum. After nearly a decade of ski touring trips in the Alps I thought I’d seen “popularity.” But the sheer devotion of Norwegians to human powered skiing and outdoor living takes the prize.

Main difference between the two lodges is Spiterstulen Lodge Hut Norway can be driven to and has more of a classic “hotel” spirit with a swimming pool and less surrounding snow this time of year. Leirvassbu on the other hand is high enough in elevation (1,400 meters) to remain surrounded during springtime by a thick, dirt-free snowpack. Skiing is thus “porch to porch” and in my view the ideal way to locate a ski touring accommodation.

Other than during summer after snow melt, all transport to Leirvassbu is over-snow, either human powered or utilizing snowcats or snowmobiles on the snow-covered access road. There are no nearby ski lifts of any sort, and probably never will be. Check it out. Leirvassbu, down valley is forward and to the left. This is the patio and loading area in front of the lodge. 85 rooms are available, and during our visit they were accommodating about 220 people in the lodge with nearly that many camping outside. The owner told me their business had increased about 30% from last year, due mostly to the increased popularity of alpine ski touring (meaning skiing using pintech and frame backcountry ski bindings). Dining room in upper part of this section, bar in lower part. Original lodge was a stone cabin built in 1875, probably sleeping about a dozen if cozy. It’s still standing just below the patio area. Today’s lodge sleeps about 200 people when full, as it is when we arrive. Patio area in front is formed by several meters of snow piled by a snowcat plow. To the left that’s co-owner Ole Grindvold enjoying his place. Always smiling, his leadership clearly has much to do with the happy spirit of Leirvassbu. This wing of the lodge is where most beds are. Peak behind is “Church Mountain” and obviously popular for various goals. What’s utterly ridiculous and somehow compelling is the number of people who dwell in the ‘tent city’ outside the lodge. At least 150 people were snow camping, most paying a small fee to use the lodge facilities. The lodge was maxed, proof being a boot drying room that smelled so bad you could not enter without holding your breath. You know how smells dredge up memories? Stian, who’s been skiing here all his life, said that’s the smell that defines Leirvassbu for him and always brings up many memories. What I found surprising was the amount of clothing hung to dry in the boot room. I can’t imagine pulling a base-layer over your head after it had absorbed the toxic miasma emanating from 200 pairs of AT boots. You’d require medical attention for sure. The air is fairly dry here, so we dried our gear by leaving it in the hallway outside our rooms. Worked fine. Menu, to give you an idea of prices. Divide by 7 for approximate USD. If you stay you can get a room with breakfast-dinner (half board), see their website for prices. Example, a coffee is about $3.50, similar to getting a java in Aspen. You do see the occasional nordic type touring rig, but tech gear has taken over in a big way. 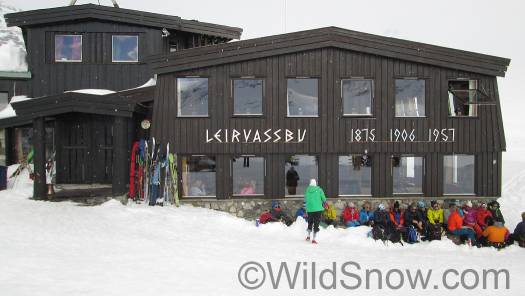 Another view outside lodge, check the dates. What amazed me more than anything was the shear variety of gear, and the Norwegian willingness to use it. This guy had been carting his family around for hours in moderate terrain above the lodge. I was highly impressed. Same with this gal, making sure her family was having fun. Everyone can get their gear hauled on the over-snow road by these snowcats purchased from the military. The lodge uses snowmobiles as well to haul these baggage trailers. Another view of the lodge with mountains everywhere asking to be skied. The group on Leirvassbu snow patio after their big day of human powered ski photography. Peak in background is Stehoe. They did a zillion laps on the lower 2/3 nicely featured area. Moonrise from the dining room. This was the beginning of yet another ski tour that happened sooner than later and is worth a blog post of its own. Read on.

I’m trying to picture how such a place could work in the US … I guess they are having spring conditions so snow stability is less of a concern and perhaps the terrain is such that there are a multitude of low angle options? It sounds a bit like a happy fun free for all in a way. Hard to see that working in the US without some kind of liability issues cropping up?

People interested in this article should check out the Norwegian Trekking Association. Back, in 1997, I did a week long tour of Jotunheimen National Park. Each day ski touring to a different lodge, which included Spiterstulen and Leirvassbu. It was the first week of March and we were the first group of the season. Some of the lodges were manned, but some were unmanned, and had to be unburied to a certain extent. But even the unmanned lodges were stocked with food. The manned lodges, like Leirvassbu and Spterstulen, served really good food. It was a great experience. I highly recommend it. The trekking association back then offered tours of varying difficulties. The mountains there are georgous, that is if the sun is out!

Yeah that just looks like a really cool place to visit. Thanks for posting Lou!

Any groomed skate trails around? I could sell it better to Jenny that way….

Tyler, it works just like huts anywhere in the world. They just provide the lodging. True, however, that any lodging or hut operation that attracted people to a place with avalanche danger is always open to potential issues, much depending on cultural norms and legal interpretations of government land use regulations and such.

As for Lerivassbu in particular, yes the spring season is the time, there have indeed been avalanche deaths in the vicinity.

Scott, I’ve heard some of the lodges do have more of a skate friendly trail system, this one just has the over-snow road and it’s not groomed for skating though they do maintain it with a Pisten Bully that has a plow. Norway has hundreds and hundreds of lodges and huts. Lou

Skating trails you won’t find at many of the mountain huts, that’s were fjellski (mountain skis) comes in, let’s you cross country ski without groomed trails. Some of the more hotel like lodges close to the road will have trails (free for all). Norwegians btw tend to favour the classical cross country skiing technique for recreation, not skating.

Norway is a very, very different country from the US, and to some extent continental Europe, when it comes to liability wrt to accidents etc. The lodge is situated in the mountains, you go in the mountains 100% on your own responsibility. No one can be held accountable, unless you’re on a profesionally guided trip (traditionally not common) or similar. Should you happen to need a rescue, it is on the other hand free. (This is also true for other parts of Norwegian society, suing someone is very uncommon, thankfully)

It’s true there are many more people on AT gear these days than before, but earlier in the year (when the snowpack is less stable) and at the more remote huts, or in flatter parts of the mountains, you still see plenty of people on fjellski. If you are just out to enjoy the day, the nature and so on, they are superior to lugging around your AT setup (however light). Also doing 30-40km trips between cabins in reasonably flat terrain on AT gear is a pain. It’s just a different way of skiing, suited for different terrain.

The boot drying room as you call it Lou is traditionally for drying clothes, as people were not wearing waterproofs, but had well treated leather skiing boots that needed limited drying.

(There’s a saying that Norwegians are born with skis on their feet, I imagine that must be more painful to the mothers givng birth, with AT skis, sharp steel edges and all 😉

Scott, Sognefjellshytta would be ideal for a mix of cross country (classic or skate) and touring. It’s sligthy northwest of Leirvassbu and accessible with car along Sognefjellsveien. The road is closed during winter, but normally opens May 1. The groomed tracks here are used by a lot of European national xc teams in May/June every year. The area (Sognefjellet) have plenty peaks in all difficulty/experience levels.

Anyone have any info about getting to these huts in early February? Are they normally open all winter or just for the spring season?

I’ll be going around for two weeks in a campervan so would appreciate suggestions for day trips from open roads (as long as the snow is relatively well ploughed I’m fine) that can include lunch/dinner stops at various huts but mostly interested in hills above them. I don’t plan on doing multi day hut to hut tours but want to come back to the van each evening.