The imposing granite mass of South Howser tower, early morning in the Bugaboos. Click all images to enlarge.

The Bugaboos! Weird name, breathtaking spires, incredible climbing (yeah, ski season is done for at least a few weeks so I forced the WildSnow “editors” to publish a climbing post). I’ve been wanting to check out the SE British Columbia climbing area ever since seeing the picture of Bugaboo and Snowpatch spires on the cover of my old copy of the the Freedom of the Hills, when I was a kid.

Coop had similar dreams of granite spires and splitter cracks, so we planned a trip to the Bugaboos for this July. As luck would have it, the weather window lined up, with a rare multi-week high pressure in the forecast. We set out on the long drive from Washington.

The 10 hour drive took longer than expected, and we arrived at the trailhead slightly before dark, on the evening of July 9th. We swatted mosquitoes as we wrapped the car in chicken wire (to protect against cunning habituated local porcupines), and packed up our much-too-heavy packs. The approach hike is fairly short, but also quite steep. After a long day of driving it seemed to take inordinately long. By the time we found Applebee Camp, made dinner, and went to bed, it was almost 3am. Psyched near the end of our long drive. This is what happens when you buy cheese, then leave it in your car for a 10 hour drive on a 95 degree day. Accelerated aging. The approach is beautiful. We thought the distant spire was pretty impressive, until we crested the hill and saw the much bigger Snowpatch and Bugaboo spires. 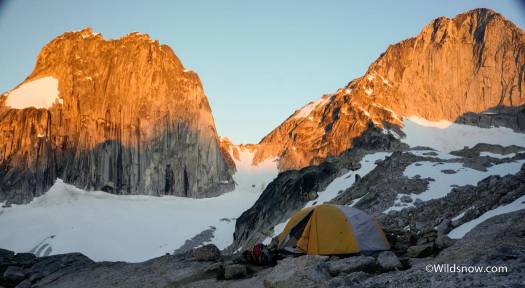 Our tent at AppleBee Camp, below Snowpatch and Bugaboo spires.

The next day we slept in, and the sun rose to reveal the imposing granite masses of Bugaboo and Snowpatch spires rising almost out of camp. We quickly got stoked, and decided to head over to Pigeon Spire, to climb the classic 5.4 west ridge to get acquainted with the terrain. We also had plans to bivouac below the South Howser Tower, in order to climb the mega-classic Beckey Chouinard Route. Ultimately we decided against the bivy, after seeing the copious snow cornices on Howser’s Ridge. No one had climbed it yet that year and our guidebook had outdated beta for the rappel descent.

The west ridge of Pigeon Spire, which I’ve heard billed as “the best 5.4 in the world,” certainly lived up to the hype. We scrambled up solid textured granite to the precipitous summit, and hung out to enjoy the sunshine and spectacular views. Climbing the beautiful W ridge of Pigeon, with the Howser towers rising in the background. Looking the other direction from Pigeon, down on the valley containing AppleBee Camp. Just below the summit of Pigeon there’s a ledge just big enough to sit on, with your feet hanging over thousands of feet of space. Rad!

The next morning, we got an early alpine start to beat the crowds on the notoriously popular NE ridge of Bugaboo Spire. We got on the route just after sunrise, but needn’t have worried, as only one other group climbed the route that day, a few hours behind us. Needless to say, I was psyched, especially after hearing horror stories of having to wait three hours to get on this route. The climbing was excellent, and once again the weather was perfect, with warm temps, and hardly a cloud in the sky. Hiking the snowfield below the start of the NE ridge. Coop just below the route, with alpenglow on the dramatic Bugaboo spire. Check it out, we’re in the Bugs! Myself mid-way up the route. Coop climbing mid-way up the route, still higher than everything else in view! Traversing the ridge between the two summits of Bugaboo. Exhilarating, exposed climbing.

We decided to aim for a mellower, more sub-alpine start the next day, and we headed up to the back of Snowpatch Spire, to climb Surfs Up, a slightly shorter 9 pitch route. The first few pitches consisted of wandery climbing over gritty, loose flakes, that had us less than excited. However, once we climbed up to the airy Surfs Up ledge in the middle of the route, the climbing changed to some of the best I’ve ever done. The next three pitches held an almost continuous 5.7-5.9 hand crack, in a beautiful wall of solid, golden granite. We let out hoops and hollers as we jammed toward the summit ridge, and then scrambled toward the top. Snowpatch Spire is more of a huge blade of rock than a spire, and when on the summit ridge, it’s breathtaking to look down on either side and see down thousands of feet to the surrounding glaciers and granite slabs.

We descended the rappel route, via convenient bolted chain anchors every 30 meters (is this really alpine rock?!), and made our way back to camp. Fairly worked after the last few days of climbing (at least myself), we decided to sleep in and hang out the next day, then head over to the base of the South Howser Tower in the afternoon. The shorter back side of Snowpatch.

Enjoying a burrito and panoramic views of the Howsers and Pidgeon spire, halfway up Snowpatch Spire. Coop near the end of Surf’s Up, high above the glacier below, enjoying great hand cracks. The last pitch, before the ridge scramble to the summit of Snowpatch Spire. Surfs up bro! Psyched to be on top of Snowpatch Spire. Looking down on AppleBee Camp from the top of Snowpatch. If you look closely you can see bright tents dotted about. Enjoying the full moon rise over camp in the evening.

The first few days in the Bugaboos absolutely blew me away. Looking at the pictures, it’s still hard to believe I was in a place that beautiful and dramatic. Stay tuned for the next iteration of this trip report, where things get decidedly less easy and sunny, and significantly more miserable, wet, and cold.

And they do backcountry ski here. Check out this article about the pioneers.

Nice work Louie! good smattering of classics. Hope you got up the Becky-Chouinard…it’s a gooder!

Beautiful photos – what a spectacular place! Canada never ceases to amaze me.

Way to get after it boys! Looking forward to the next installment.

Oh my gosh Louie these photos are incredible! I’ve always known that the Bugaboos were supposed to hold immense beauty, but woah! I just want to go gawk. What kind of camera did you get? Great captures!

Great photos, thanks for sharing

Thanks! Incredible trip for sure, it’s hard to take a bad photo up there. About a month ago I got a Sony Alpha A7 mirrorless camera. Very impressed with it so far!

Nice write up and pics. That camera cost you at least an engineer’s wage or 3 pairs of dynafit skis. Oh..and congrats on your degree.

Yep, I’m jelly. I’ll make my final judgement on wether spending my summer at sea level was a bad idea until after part 2 though.

Hope y’all are still getting after it, I can’t wait to hear about South America!